MyCloudIT deploys RDS for you taking the complexity and time consuming nature out of such operations. Below is an overview of what we built for you.

This article applies to MCIT RDS modern (v3), and does not apply to MCIT classic (v2).

MCIT automates the Installation, management and monitoring of your RDS deployments within Azure.  You take 10 minutes to describe how you want it built and our automation takes the next 1 (approximate) hour to build your RDS solution in Azure.  Once it’s built, you have a fully functional RDS deployment.

We will show "what we build" for an example small business called "Freds Fruit Farms". Below are the deployment options the customer selected.

Note: The "Farms" resource-name-prefix was selected in deployment.

This server holds the RDS Gateway and RDS Web Access roles.  These two roles provide access to the RemoteApp and Desktop Sessions provided by the RDS deployment.  The RD Gateway role enables authorized remote users to connect to resources within the RDS deployment.  This role manages the security model and which resources users can connect to.  This role also routes traffic from the public internet to the backend Session Hosts via RDP over HTTPS to ensure a secure and encrypted connection between users on the Internet and the internal RDS Session Hosts that deliver the resources.  This role can be used in conjunction with additional security capabilities if you want to add additional security to your RDS deployment. The RDS Web Access role enables users to access both the RemoteApp and Remote Desktop "landing portal" from a web browser.

The RD Connection Broker role is responsible for connecting new users to the appropriate Session Host Server.  This role is responsible for load balancing users (as they log in) across the Session Host Servers supporting the collection the user is connecting to. The RDCB role can be considered the brain of RDS. MCIT deployments offer autoscaling to provide a balance between the user experience and runtime cost of your deployment. This ensures that your users are provided with an excellent user experience without using more resources than necessary for your deployment depending on the load at any point in time.

The RDS Licensing Role manages the licensing portion of the RDS deployment.  Each user within a deployment requires an RDS CAL or an RDS Subscriber Access License (SAL). If the customer already owns RDS CALS with Software Assurance, they will be properly licensed to use RDS within Azure. If they do not already own the RDS CALs with Software Assurance, the customers can purchase RDS SALs from either a SPLA partner or directly from MCIT.

Overview of How we integrate into Azure 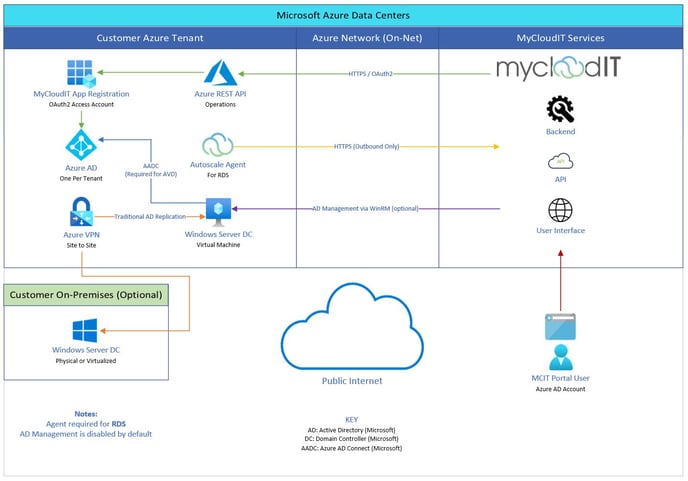